Allen Ginsberg: Pingpong of the Abyss 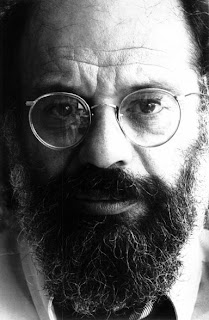 Irwin Allen Ginsberg (June 3, 1926 – April 5, 1997) was an American poet. His father, Louis was a poet and high school teacher. His mother, Naomi, was a communist. Ginsberg is best known for Howl (1956), a long poem about the self-destruction of his friends of the Beat Generation and what he saw as the destructive forces of materialism and conformity in the United States at the time.

Following is some of his verse, his life, and his spirit:

America
I've given you all and now
I'm nothing.

I can't stand my own mind.

America when will we end the human war?
Go fuck yourself with your atom bomb
I don't feel good don't bother me.
I won't write my poem till
I'm in my right mind.

America why are your libraries full of tears?
America when will you send your eggs to India?
I'm sick of your insane demands.
When can I go into the supermarket
and buy what I need with my good looks?

America after all it is you and I
who are perfect not the next world.
Your machinery is too much for me.
You made me want to be a saint.
There must be some other way
to settle this argument.

Burroughs is in Tangiers
I don't think he'll come back
it's sinister.
Are you being sinister
or is this some form of practical joke?
I'm trying to come to the point.
I refuse to give up my obsession.

America the plum blossoms are falling.
I haven't read the newspapers for months,
everyday somebody goes on trial for murder.

America I feel sentimental about the Wobblies.
America I used to be a communist when I was a kid
and I'm not sorry.
I smoke marijuana every chance I get.
I sit in my house for days on end
and stare at the roses in the closet.
When I go to Chinatown I get drunk
and never get laid.

My mind is made up
there's going to be trouble.
You should have seen me reading Marx.
My psychoanalyst thinks I'm perfectly right.
I won't say the Lord's Prayer.
I have mystical visions and cosmic vibrations.

America I still haven't told you
what you did to Uncle Max
after he came over from Russia.
I'm addressing you.
Are you going to let our emotional life be run by Time Magazine?
I'm obsessed by Time Magazine.
I read it every week.
Its cover stares at me every time I slink past the corner candystore.
I read it in the basement of the Berkeley Public Library.
It's always telling me about responsibility.
Businessmen are serious.
Movie producers are serious.
Everybody's serious but me.

It occurs to me that I am America.
I am talking to myself again.
Asia is rising against me.
I haven't got a chinaman's chance.
I'd better consider my national resources.
My national resources consist of two joints of marijuana
millions of genitals
an unpublishable private literature
that goes 1400 miles and hour
and twentyfivethousand mental institutions.

I say nothing about my prisons
nor the millions of underpriviliged
who live in my flowerpots
under the light of five hundred suns.
I have abolished the whorehouses of France,
Tangiers is the next to go.
My ambition is to be President
despite the fact that I'm a Catholic.

America how can I write a holy litany
in your silly mood?
I will continue like Henry Ford
my strophes are as individual as his automobiles
more so they're all different sexes

America free Tom Mooney
America save the Spanish Loyalists
America Sacco & Vanzetti must not die
America I am the Scottsboro boys.

Scott Nearing was a grand old man
a real mensch
Mother Bloor made me cry
I once saw Israel Amter plain.

The Russia wants to eat us alive.
The Russia's power mad.
She wants to take our cars from out our garages.
Her wants to grab Chicago.
Her needs a Red Reader's Digest.
her wants our auto plants in Siberia.

Her make us all work sixteen hours a day.
Help.

America this is quite serious.
America this is the impression I get from looking in the television set.
America is this correct?
I'd better get right down to the job.
It's true I don't want to join the Army
or turn lathes in precision parts factories,
I'm nearsighted and psychopathic anyway.
America
I'm putting my queer shoulder to the wheel.

What sphinx of cement and aluminum bashed open
their skulls and ate up their brains and imagi-
nation?

Moloch whose eyes are a thousand blind windows!
Moloch whose skyscrapers stand in the long
streets like endless Jehovahs!
Moloch whose fac-
tories dream and croak in the fog! Moloch whose
smokestacks and antennae crown the cities!

Moloch who entered my soul early! Moloch in whom
I am a consciousness without a body! Moloch
who frightened me out of my natural ecstasy!

They broke their backs lifting Moloch to Heaven! Pave-
ments, trees, radios, tons! lifting the city to
Heaven which exists and is everywhere about
us!


Magnificent, mourned no more, marred of heart, mind behind, mar-
ried dreamed, mortal changed--Ass and face done with murder.
In the world, given, flower maddened, made no Utopia, shut under
pine, almed in Earth, blamed in Lone, Jehovah, accept.
Nameless, One Faced, Forever beyond me, beginningless, endless,
Father in death. Tho I am not there for this Prophecy, I am unmarried, I'm
hymnless, I'm Heavenless, headless in blisshood I would still adore
Thee, Heaven, after Death, only One blessed in Nothingness, not
light or darkness, Dayless Eternity--
Take this, this Psalm, from me, burst from my hand in a day, some
of my Time, now given to Nothing--to praise Thee--But Death
This is the end, the redemption from Wilderness, way for the Won-
derer, House sought for All, black handkerchief washed clean by weeping
--page beyond Psalm--Last change of mine and Naomi--to God's perfect
Darkness--Death, stay thy phantoms!


II
Over and over--refrain--of the Hospitals--still haven't written your
history--leave it abstract--a few images
run thru the mind--like the saxophone chorus of houses and years--
remembrance of electrical shocks.
By long nites as a child in Paterson apartment, watching over your
nervousness--you were fat--your next move--
By that afternoon I stayed home from school to take care of you--
once and for all--when I vowed forever that once man disagreed with my
opinion of the cosmos, I was lost--
By my later burden--vow to illuminate mankind--this is release of
particulars--(mad as you)--(sanity a trick of agreement)--
But you stared out the window on the Broadway Church corner, and
spied a mystical assassin from Newark,
So phoned the Doctor--'OK go way for a rest'--so I put on my coat
and walked you downstreet--On the way a grammarschool boy screamed,
unaccountably--'Where you goin Lady to Death'? I shuddered--
and you covered your nose with motheaten fur collar, gas mask
against poison sneaked into downtown atmosphere, sprayed by Grandma--
And was the driver of the cheesebox Public Service bus a member of
the gang? You shuddered at his face, I could hardly get you on--to New
York, very Times Square, to grab another Greyhound--