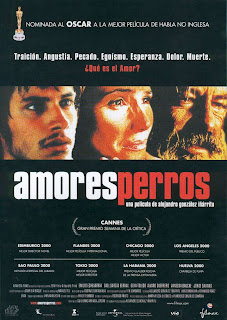 From Mexico, from some huge urban environment, a film has emerged that stuns, angers, seduces, and challenges us. Director Alejandron Gonzaliz Inarrituhas created a dark vision of the trinity; three overlapping plots and three sets of overlapping characters; impaled at their core by a horrible car crash, a crash that touches, mutilates, and changes all of them.

It, as a film, has a stark veneer of sadness, but it is beautifully photographed in brilliant bursts of Latin colors; scenes of Carnival justaposed with scenes of seduction, murder, violence,and lethal lonliness. This unique vision vibrates, reasonates, throbs, and is inhabited by dogs; from viscious killers to lap pooches. These canine players emerge as the conscience, and the soft underbelly of the film. Allof the film's main characters own a dog, or many dogs.The people, within the machinations of plot behave like pack animals; they identify with and behave like their dogs. Often they love their dogs more than they do their fellow men; and what they covet, what they love the most...they destroy.

The scenes of the professional dog-fighting were, of course, shocking beyond measure. Somehow one knows that the deaths and incredible bloodshed were merely F/X, but each time it happened we had to recheck our reality meters.

During the overlap of lives and plots, there are restarts of the scenario from fresh perspectives; al lculminating in the moment of car crash, the vertex of the movie. This film hits hard, and we are left limp from the experience. The director did not seem to be pressured to provide any lightness, or even light in the various shades of darkness. Love was present, but misplaced, trodden on, and misused. We, post-viewing, emerge back into our lives, ready to reassess what we can settle for, in terms of our personal happiness.