A Look at Raymond Carver 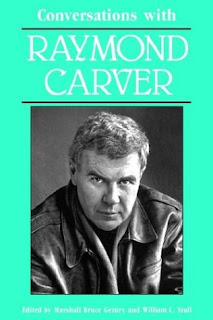 One of my favorite poets was Raymond Carver, who lived for a time, and died in Port Angeles, WA. He was only 50 years old when he died. He loved Puget Sound and the Straits of Juan de Fuca. I have a volume of his poetry entitled WHERE WATER COMES TOGETHER WITH OTHER WATER. His poems spoke to me uniquely.

During the years of working in different jobs, rearing children, and trying to write, Carver started to drink heavily and stated that alcohol became such a problem in his life that he more or less gave up and took to full-time drinking. In the fall semester of 1973, Carver was a teacher in the Iowa Writers' Workshop with John Cheever, but Carver stated that they did less teaching than drinking and almost no writing. The next year, after leaving Iowa City, Cheever went to a treatment center to attempt to overcome his alcoholism, but Carver continued drinking for three years. After being hospitalized three times because of his drinking (between June of 1976 and February or March of 1977), Carver began his 'second life' and stopped drinking on June 2, 1977, with the help of Alcoholics Anonymous.
In 1982, Carver and first wife, Maryann, were divorced.[1] From 1979 Carver had lived with the poet Tess Gallagher whom he had met at a writers' conference in Dallas, Texas in 1978. They married in 1988 in Reno, Nevada. Six weeks later, on August 2, 1988, Carver died in Port Angeles, Washington, from lung cancer at the age of 50. In the same year, he was inducted into the American Academy of Arts and Letters. He is buried at Ocean View Cemetery in Port Angeles, Washington. As his will directed, Tess Gallagher assumed the management of his literary estate.

Carver's career was dedicated to short stories and poetry. He described himself as "inclined toward brevity and intensity" and "hooked on writing short stories" (in the foreword of Where I'm Calling From, a collection published in 1988 and a recipient of an honorable mention in the 2006 New York Times article citing the best works of fiction of the previous 25 years). Another stated reason for his brevity was "that the story [or poem] can be written and read in one sitting." This was not simply a preference but, particularly at the beginning of his career, a practical consideration as he juggled writing with work. His subject matter was often focused on blue-collar experience, and was clearly reflective of his own life. The same could probably be said of the recurring theme of alcoholism and recovery.

Carver's writing style and themes are often identified with Ernest Hemingway, Anton Chekhov, and Franz Kafka. Carver also referred to Isaac Babel, Frank O'Connor, and V. S. Pritchett as influences. Chekhov, however, seems the greatest influence, motivating him to write Errand, one of his final stories, about the Russian writer's final hours.

To scream with pain, to cry, to summon help, to call
generally - all that is described here as "roaring."
In Siberia not only bears roar, but sparrows and mice as well.
"The cat got it, and it's roaring," they say of a mouse.

- from "Across Siberia,"
by Anton Chekhov.

"Let's Roar, Your Honor" from All Of Us: The Collected Poems The Harvill Press, 1996. Copyright © 1996 by Tess Gallagher.
Found poetry in "Across Siberia" by Anton Chekhov from The Unknown Chekhov, translated by Avrahm Yarmolinksy, Farrar, Straus And Giroux, 1954. Copyright © 1982 by Babette Devtsch Yarmolinsky.

it gets run over by a van.
you find it at the side of the road
and bury it.
you feel bad about it.
you feel bad personally,
but you feel bad for your daughter
because it was her pet,
and she loved it so.
she used to croon to it
and let it sleep in her bed.
you write a poem about it.
you call it a poem for your daughter,
about the dog getting run over by a van
and how you looked after it,
took it out into the woods
and buried it deep, deep,
and that poem turns out so good
you're almost glad the little dog
was run over, or else you'd never
have written that good poem.
then you sit down to write
a poem about writing a poem
about the death of that dog,
but while you're writing you
hear a woman scream
your name, your first name,
both syllables,
and your heart stops.
after a minute, you continue writing.
she screams again.
you wonder how long this can go on.

These fish have no eyes
these silver fish that come to me
in dreams,
scattering their roe and milt
in the pockets of my brain.

I woke up with a spot of blood over my eye.
A scratch halfway across my forehead.
But I'm sleeping alone these days.
Why on earth would a man raise his hand
against himself, even in sleep?
It's this and similar questions
I'm trying to answer this morning.
As I study my face in the window.


Yes, dear readers, get out and find some Raymond Carver, and read it and weep and smile and enjoy.