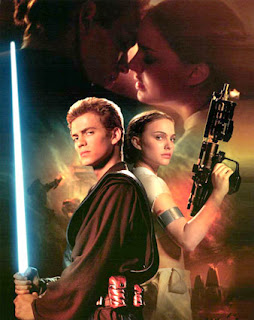 Shame on you, George Lucas. We STAR WARS fans waited for so long for this prequel, and what you delivered is sad beyond sad. The weakest link is the writing.You got lucky with us thirty years ago. The special effects and the concept of the classic Star Wars features, all three of them, blinded us to the sophmoric writing. But at present, we as viewers are more sophisticated, and special effects alone can not knock us flat with admiration. Poor writing plus poor acting leaves us very cold.

Hayden Christensen is not yet an actor. He scored well in a few modern roles playing a confused adolescent. But if he was the best candidate after a worldwide search, somebody casting this film was blind or lazy; or both. He is handsome, but shallow, and his inexperience blanches every frame he inhabits. Natalie Portman had to struggle with her poorly written dialogue, but she nearly pulled it off. Ewan McGregoris credible as Obi-Wan, but he was working on quarterpower and basically walked through his scenes. The old war horse, Christopher Lee, came off best, through sheer talent, style, and grace; just as he contributeda lot to the LORD OF THE RINGS trilogy. Samuel L. Jackson appeared totally lost, and he came off even worse than he did last year in STAR WARS: Episode I. He used a laser sword poorly, and he read lines like an amateur; this from an actor who can be very effective in a contemporary film. Kenny Baker and Anthony Daniels represented one of the only slender threads that drew us back to your former magnificence. Jar Jar Binks, as a character, needs to be scrapped. It is confusing, demeaning, and as in Episode I, its dialogue in nearly unintelligable.

So, next time, as I am sure this franchise will continue, George; swallow your billionaire's pride, cast more effectively, and most importantly, hire a writer.