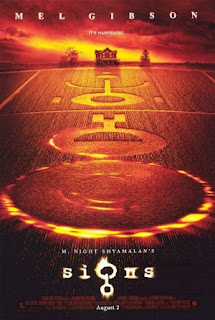 M. Night Shyamalan is a director with great style. His visions are unique. His focus is always fresh and clear. Like Spielberg, he tackles various genre, and he is able to wring out new perspectives; and he uses children as a primary vehicle to inhabit the world, both with a sense of wonder and fear.

Bo: [giving the dog a bowl of water] It tastes funny. Morgan takes a sip.
Morgan: It does not. It's just tap water. Besides, he licks his butt every day, I don't think he'll mind.

Much has been written about the lapses of logic in this film, yet I find its stylistic flair masks its imperfections perfectly. Shyamalan has woven a nightmare for us, pregnant with primal fears and suspensful moments; and like any other bad dream, certain things are out of balance. We, as the viewers don't realize the director's intentand perspective. We respond literally, and certain questions nag us...why don't the Hess boys own a gun? Why don't the aliens know more about the dangers of the earth's environment? Haven't the armies of the earth mobilized to fight them, and if so, what are the results? Why don't the aliens use more technology t oattack us with?

Morgan: They said there are one of two outcomes of an invasion. One: they fight, and are defeated, and have to return again with full forces hundreds or even thousands of years later. Graham Hess: What's two?
Morgan: They win.

And so we wonder if this is an actual weakness in the writing, or do we expect too much, have seen too much F/X laden Sci-Fi, loaded with pyrotechnics? Reviewers seem conflicted on these points. I tended to enjoy the film, praising the performances, and was propelled along on the crest of emotion as the family faced its peril. Mel Gibson, as lapsed minister Graham Hess, gives a heartfelt performance that reminds us what a fine actor he really is. His humanity, his doubts and fears, just leap off the screen.

Graham Hess: People break down into two groups when they experience something lucky. Group number one sees it as more than luck, more than coincidence. They see it as a sign, evidence, that there is someone up there, watching out for them. Group number two sees it as just pure luck. Just a happy turn of chance. I'm sure the people in group number two are looking at those fourteen lights in a very suspicious way. For them, the situation is not fify-fifty. Could be bad, could be good. But deep down, they feel that whatever happens, they're on their own. And that fills them with fear. Yeah, there are those people. But there's a whole lot of people in group number one. When they see those fourteen lights, they're looking for a miracle. And deep down, they feel that whatever's going to happen, there will be someone there to help them. And that fills them with hope. See what you have to askyourself is what kind of person are you? Are you the kind that sees signs, sees miracles? Or do you believe that people just get lucky? Or, look at the question this way: Is it possible that there are no coincidences?

When he converses with his wife, as she is dying, love is wrenched from his grasp, torn from his chest. He is left with an inability to continue to believe in God, and a deep despair that grips him like a choke collar.

Later, as he is holding his son, Morgan, in the basement, as the family is forted up, hiding from the aliens; while the boy is having an asthma attack, one can clearly see that Mel, as an actual parent, intensily loves his own children.

Graham Hess: What are you thinking about?
Bo: Why do you talk to Mom when you're by yourself?
Graham: It makes me feel better.
Bo: Does she ever answer back?
Graham: No.
Bo: She never answeres me either.

Graham Hess: Everybody in this family needs to just calm down and eat some fruit or something.
Morgan: Maybe we should say a prayer.
Graham: No.
Morgan: Why not?
Graham: We're not saying a prayer.
Morgan: Bo has a bad feeling.
Bo: I had a dream.
Graham: We aren't saying a prayer. Eat!
Morgan: I hate you!
Graham: That's fine.
Morgan: You let Mom die.
Merrill: Morgan.
Graham: I am not wasting one more minute of my life on prayer. Not one more minute. Understand?
[Bo starts crying}
Graham: Now we are going to enjoy this meal. No one can stop us from eating this meal, so enjoy it! Stop crying!
Merrill: Graham.
Morgan: Don't yell at her!
Graham: All right, since you're all not going to eat. I'm going to try some of everything.[crying continues...and then everyone hugs]

Joaquin Phoenix was very effective as the brother Merrill. He filled in, provided the strength that Mel needed, to continue on the farm, to raise his children, and finally to fight against the alien menace that threatened to destroy them.

Merrill: Hey, you guys okay?
Morgan: Some guy had a sign saying it was the end ofthe world.
Merrill: Don't worry.
Morgan: You won't let anything happen to us, right?
Merrill: No way.
Morgan: I wish you were my Dad.
Merrill: What did you say? Don't you ever say anything like that again. Ever!

Merrill: One time I was at this party...and I was sitting on the couch with Amanda McKinney. She was just sitting there, looking beautiful. So, I lean into kiss her, and I realize that I have gum in my mouth. So, I turn to spit it out and put it in a papercup. I turn back, and Amanda throws up all over herself. I knew the moment it happened, it was a miracle. I could have been kissing her when she threw up. I would have scarred me for life. I may never have recovered.

Rory Culkin as Morgan, the son, was likewise quite good. His intellect and bravery, gave us a tiny hero to cheer for, and to pray for. Abigail Breslin, as Bo, the daughter, was wonderful. She is a beautiful child, secure in her naturalness, and strangely calm as the hectic drama swirled all around her. Cherry Jones, as Officer Paski, brought dignity and warmth to the role of the local constabulary. It was refreshing to see a woman in this role.

In a great scene, toward the end of the film, when Morgan survived the gassing by the alien, Graham held him in the yard.

Graham Hess: Morgan, after you were born, the doctor gave you to your mother. When she first looked at you, you just stared right back. You both just stared at each other for the longest time, and you didn't even cry.

Principally, this is a 1950's invasion film, just cloaked in modern perspective. There is no Spielberg sweetness and benevolence dropping on us from the night sky; rather these aliens are the stuff of 1930's pulp fiction and 1940 B-movies. The aliens are out to conquer and harm mankind. They are the bogeymen, and the things that howl and go bump in the night, staring through our windows, and running across our rooves. And they are the stuff of allegory and prophecy and symbolism. There are myriads of layers within this black dream. Enjoy them.

Mel Gibson? Isn't he the sicko who killed Christ and took pictures of it?