Death as an Adventure 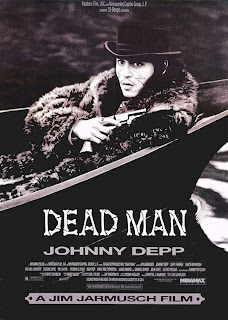 DEATH AS AN ADVENTURE

This film, from director Jim Jarmusch, is a benchmark. It sets the tone for all bizarre westerns. It plays out fitfully, like a jagged nightmare. The black and white cinematography by Robby Muller is sharp and innovative; creating a Noir acid-dream atmosphere. The musical score by Neil Young, initially thrills us; just the right chords and throbs from his acoustic guitar. Then it becomes tediously repetitive. Is this intentional ? Is Jarmusch using this repitition as a motif ? Possibly.

I felt that from the opening credits the whole film was done in flashbacks. As the frontier train rumbled toward its dark destination, there were a series of fade-outs; with passengers changing into others, and terrain metamorphosing into a bleak arrid wasteland.The fades were like blinks, making the new scenes more illusionary and dream like.

Johnny Depp, with his performance of William Blake, added to his personal pantheon of eccentric roles. Part Buster Keaton, part William Bonney, Depp wandered the streets of a decaying town knee-deep in mud and depravity. We wanted to laugh, but were afraid to. In that desolate town, nothing appeared normal. The townsfolk were zombie-like, or possessed by unseen demons. Madness coarsed through the streets like a hot wind. Towering over the edge of town, like the feudal castle of Vlad, the Dickinson Metal Works belched black smoke into a cloudless sky.

Lied to, and betrayed, by the head clerk, Depp barged into the office of the owner, John Dickinson; played by Robert Mitchum as a character obviously insane ,paranoic, and dangerous. Rushing from the cavernous darkness of the factory, Depp found himself desolate, lost, and desperate. Wandering aimlessly, he met and bedded a flower girl (Mili Avital). She happened to be the former girlfriend of Dickinson's son, Charlie. In the midst of their passion, Gabriel Byrne, as Charlie, burst into her room and in a fit of rage, shot her and Depp. In self-defense, Blake killed the intruder. Mortally wounded, Depp began hs flight, his quest, his Death Adventure.

The entire cast is first-rate. Gary Farmer, as the European educated Indian,"Nobody", dominates the film.Was he an angel of death, a spirit guide, or just a native American vagabond ? We can decide for ourselves.

Nobody: I was taken east, in a cage. I was taken toToronto. Then Philadelphia. And then to New York. And each time that I arrived at another city, somehow the white men had moved all their people there ahead of me. Each new city contained the same white people as the last, and I could not understand how a whole city of people could be moved so quickly.

Nobody: It is strange that you do not remember any of your poetry, William Blake.
Some are born to sweet delight;
some are born to endless night.
The vision of Christ that thou dost see,
is my visions greatest enemy.

Things which are alike,
in nature,
grow to
look alike.

If the doors of perception were cleansed,
everything would appear as it is;
infinite.

Nobody: Did you kill the white man who killed you ?
Blake: I'm not dead, am I ?
Nobody: That weapon will replace your tongue. You will learn to speak through it. And your poetry will now be written with blood. You were a poet and a painter, William Blake. But now, you are a killer of white men.

Lance Henriksen and Michael Wincott are killers hired to hunt down Blake. Their portrayals are vivid and off-beat; especially Henriksen as Cole Wilson; evi lincarnate. At one point, Wincott said, describing Henriksen," Did you know he killed his parents ? Then he fucked them. And then he ate them." Later, after Henriksen killed Wincott, whose character was an incessant talker, Wilson sits by a campfire, chowing down on pieces of the other man, chewing calmly on a hand connected to a wrist.

As his strength ebbed, along the way Depp met many colorful characters; an odyssey of sorts. One night, by chance, he met Billy Bob Thornton (Big George), and Iggy Pop as Sabatore "Sally" Jenko, who was attired in a calico dress and bonnet.

Blake: I...smell...beans.
Big George: You know I just, I can't drink whiskey like I useto could. My old belly just ain't no count. I get the shits everytime don't you know. Well, Sally, I don't give a pig's ass what anybody says, I still say you make a hell of pot of beans. By the way, what's a philistine ?
Sally: It's just a real dirty person.

Big George: By God, I'm hit. Lord have mercy. Burns like hellfire. You son of a bitch. I'm gonna have to kill somebody now. That's terrible.
Sally: It's horrible.
Big George: Terrible is what it is.

They too, had to be dispatched by Blake; in self-defense. As the death toll rose, it seemed odd that Blake never picked up a discarded weapon, or more ammunition. Was this inconsistency an oversight, just directorial sloppiness; like the 30-shot revolvers used in the past in the movies of Roy Rogers and William Boyd...or did it point to the possibility that the whole film represented the last gasps, the fevered sordid dreams of a dying man ? John Hurt, Crispin Glover, Alfred Molina, and Steve Buscemi all spice up the narrative with sparkling off-center characters.

Nobody: The eagle never lost so much time as when he submitted to learn from the crow. The evil stench of white man precedes him; stupid fucking white man.
the Fireman: I wouldn't trust no words written on nopiece of paper.

The film is unsettling, illogical, mildly maddening and wildly creative; both frightening and fascinating, like petting a pit viper. The end, appears to be the beginning, dipping us back into the cycle of a life; hinting that Death is not an end, rather it is merely a transition; that each life is but a smudge on a larger canvas.