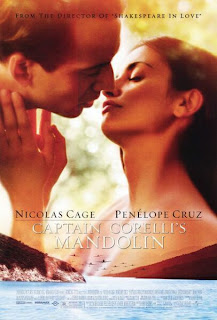 Director John Madden has quite a track record. Films like MRS.BROWN, and SHAKESPEARE IN LOVE were triumphs; artistically fantastic transfers from a novel to the screen. I'm sure that he approached this film with the same enthusiasm. He probably loved the book, and it was a good one. This is a classic tale, full of romance, war, betrayal, seduction, ethnic music and dance.

The locales he picked for the film certainly did look like the Greek Isles. Penelope Cruz radiates as Pelagia, the village doctor's daughter. She managed to be intelligent, sexy, earthy, and vulnerable all in the same breath. She loved her father, and she had studied medicine with him all ther life. She could have been a nurse. She could have studied to be a doctor. She loved her betrothed, Mandras, a young muscular fisherman; played very convincingly by Christian Bale.

But WWII intervened, and its dark shadow blotted out the idyllic qualities of her dreams, and her lifestyle; tomping on them like a Nazi jackboot. John Hurt found the pulse of his role as Dr. Iannis. His portrayal was touching, funny, profound, and tragic; a tribute to his skill as an actor. His became the pivotal role in this story. The movie is worth seeing just to experience his talent.Christian Bale found the simplicity, strength, and patriotism to play Mandras. We believed in him (though we secretly felt, as the doctor did, that his intellect was beneath Palagia's, and that some day she would rue marrying him), and we cheered him on when he ran off to become a resistance fighter. Irene Papas, always reliable, was wonderful as Drosoula, the mother of Mandras. She is, of course, as Greek as olive oil, and her mere presence gave credibility to the tale.

And then, sadly, we come to the Achilles heel of the production, the flawed edifice known as Nicolas Cage. Mr. Cage, despite his academy award, is the kind of narrow-range actor whose talent has specific parameters; mostly comedic. When cast appropriately, he can be extremelly effective. Not so this time. Now he has been bad, or had weak moments in many of his films. Cage whose real name is Coppola, has the blood of the Mediterranean running through his veins, and he should be ashamed of himself. His accent was so bad, it sounded like a fledging thespian in their first high school play. Even so, his Antonio Corelli had its moments. The guy can be charming. But there was no real depth, no sense of truth in his technique.Captain Corelli was made of cardboard.

No matter how sumptious the rest of the production maybe, and actually all of the supporting cast, the art design, the writing, and the musical score for this film were very good; when the point man, the lead singer is weak, the whole project sinks like a rowboat with a split seam. The movie was critically slammed and panned, and it deserved it. Even the trailer could not disguise its flaws.

One can, if they really try, overlook the poor performance delivered by Cage, but unfortunately the heart of the film, the great romance, the love story between Corelli and Pelagia, was as listless and lifeless as flat stale beer; no sparks, no chemistry. And a body of work without a beating heart is just zombie art; a still birth. For lovers and readers of the book, the movie is a must-see, though, it turned out to be a lukewarm experience. But always remember, watching a film is a very personal journey into ten kinds of Art. So if you like Madden as a director, or Cage as an actor, then give this lovely, albeit flawed, film a viewing, and see what you think.